Unknown; published by Ferdinand Beyer
(*Note: 1-star is earned upon tapping the first set of the double tiles at 100 points.)

Beyer No. 8 is the sixth stage of Piano Tiles 2. It is unlocked when the player reaches Level 3.

The music was believed to be collected by Ferdinand Beyer, a German composer popularly known for his work, Vorschule im Klavierspiel, an elementary book for piano commonly used for education. He made some piano arrangements of orchestral music, light music, and he is best known for his influence to elementary piano education[1].

However, Der Flohwalzer is not composed by Beyer. It is not even known if it is actually number eight in Beyer's collection. Even so, the music is widely known around the world, but with various titles in different countries. In Japan, it is known as Neko funjatta (猫踏んじゃった, I stepped on a Cat). In Spain, it is known as La chocolatera. In Russia, it is known as Sobachiy Val's (Собачий Вальс, Dog Waltz). In the United Kingdom, it is known as Chopsticks. There are still various countries with translated names, with Taiwan (踩到貓兒, Cǎi dào māo ér, I stepped on a cat), China (跳蚤圆舞曲, Tiào zao yuán wǔ qǔ, Flea Waltz), Belgium (Valse de Puce, Flea Waltz), and Netherlands (Vlooienmars, Flea March) as examples.

Flea Waltz is called on Real Piano application by Gismart.

The full version of the piano piece is included in the stage from beginning to end. As such, there are no differences, although with multiple popular versions existing in the world, it is difficult to distinguish.

The full version of the piano piece is included in the stage from beginning to end.

The difficulty mainly comes from the abundance of double tiles, which can mess up the player badly if not careful. It is crucial to remember that double tiles only appear in either 1st and 3rd column, or 2nd and 4th column. With that in mind, it is a lot easier to manage them. Try to also place the tapping zone closer to the middle of the screen, instead of at the bottom, so that it is easier to have a recovery chance should one of them miss.

It is also worthy to note that a set of double tiles is worth 4 points, twice of 2 normal single tiles.

Since none of the holding tiles are present, except one at the end of each loop, it is incredibly difficult to complete the crowns considering the double tiles. Special care and focus is needed to ensure safety. 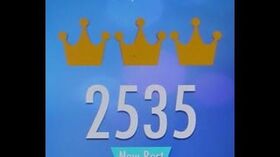