Piano Tiles Wiki
Register
Don't have an account?
Sign In
Advertisement
in: Unlocked by Level Up, Piano Tiles 2 Stages, Slow Songs,
and 2 more

Bluestone Alley is the seventh stage of Piano Tiles 2. It is unlocked when the player reaches Level 3. The current world record is 3925 by PGN.

This is the original composition of Piano Tiles 2 [1] It is composed by Chinese composer Congfei Wei (魏琮霏, Wèi cóng fēi). The song is in the key of G Major, modulating to E Major at the end. It contains more syncopated notes and flowing left-hand figures, along with more irregular rhythm, a common trope in modern piano compositions.

The music contains three sections, with each star earned after its individual completion. The introduction is a bright and colorful section, with the uplifting melody at the high registers and light accompaniment at the middle. Afterwards, the main theme section explores more emotional depth in the lower octaves. With a smooth transition, the music modulates, playing the introductory theme again, but with a warmer atmosphere as the key changed. The music then ends the same as the introduction.

The timing of the taps mainly depends on the right hand part, but sometimes the left hand figures are considered. Assuming a 4/4 time signature, an eighth note is counted as a single tile, and a quarter note or longer is counted as a holding tile. The only location where a pair of double tiles are present is the grace notes at the end of the first section.

The stage is not very long, but it is generally 50% longer than the previous ones. As such, it takes a longer time to reach 3 stars. The slightly more difficult part involves getting the rhythm of sustained notes correct to maximize the scores.

Getting crowns is significantly more difficult than the stars, mainly due to the pattern of the rhythms. Such difficulties can only be overcome through experience, and gradually learning them. 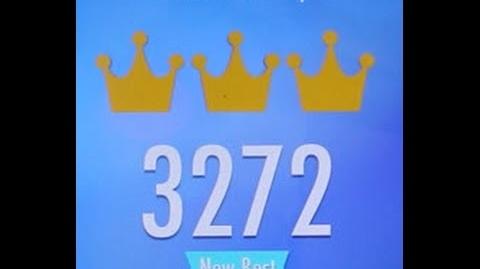