Happy New Year is the fifth (or sixth if counting song boxes) stage of Piano Tiles 2. It is unlocked when the player reaches Level 3.

The melody of "Happy New Year" was originated from Western America, named "Oh my darling, Clementine". It is usually credited to Percy Montrose. This folk song was popularized by the Mexican miners during the 1849 California Gold Rush. The song, while there are limited resources, is believed to be based on another song, "Down by the River Liv'd a Maiden", by H. S. Thompson (1863).

While it might seem like a sad ballad moaning at the loss of the daughter Clementine during the Gold Rush, it was in fact a parody of the sad ballad due to the exaggerated details, such as Clementine was wearing boxes because her shoe size was number 9 (and there seemed to be no shoe sizes of number 9 at that time), and that Clementine drowned into the water due to a splinter that caused her to fall[1].

This folk song then became well-known among Chinese culture, and the lyrics was changed to celebrating Chinese New Year and has been known as it since. In various Asian countries where the Chinese New Year is celebrated, the song is often sung and heard.

The lyrics of Happy New Year (新年好呀, Xīnnián hǎo ya) is as follows[2]:

Apart from the lyrics, there are still slight differences. In Happy New Year, the pickup measure present in Oh My Darling, Clementine was removed, and each phrase begins on the downbeat. This also affects the accompaniment.

The music of the stage plays four times, each time with minimal variation, before repeating a loop. In between each time played, there is a short transition, except for between the third and fourth time. The criteria for each of the three stars is located after completing the first, second, and fourth time. The timing of the taps depends on the right hand part - an eighth note as a single tile, a quarter note or longer as a holding tile. Throughout the stage, the ratio of single tiles and holding tiles in each section is pretty constant. This stage has too a very simple tiles rhythm, 2 single tiles, 2 holding tiles.

Despite the slightly higher tiles per second, the simplicity of the tapping pattern makes it an easy stage to pass.

Things gets slightly harder when the speed is faster. Therefore, it is important to stay focused for the crowns to be earned, especially the last one. 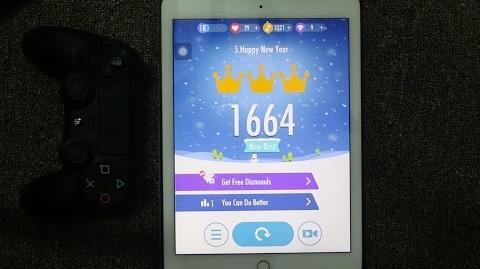