Heidenröslein is the eleventh stage of Piano Tiles 2. It is unlocked when the player reaches Level 5.

Heidenröslein ("Rose on the Heath" in English) is a poem by Johann Wolfgang von Goethe in late eighteenth century. The poem is about a young man's love rejected by his lover, who is symbolized by a rose. The poem has been set to music by many composers, most famously by Schubert in his lieder of the same name (D. 257).

A modern piano version is used, loosely following the original score. It starts in E Major, and then modulates to F Major.

The stage consists of a mix of single tiles, double tiles, and holding tiles. Three-row double tiles are introduced, mainly occurring in the left-hand 32nd-note figures.

As the stage speeds up, passing the stage with 3 crowns requires the ability to play in a speed of at least 7.00 tiles per second (420 tiles per minute), which is the speed of the third section of the third loop. Getting familiar with when the double tiles would spawn is crucial to success. 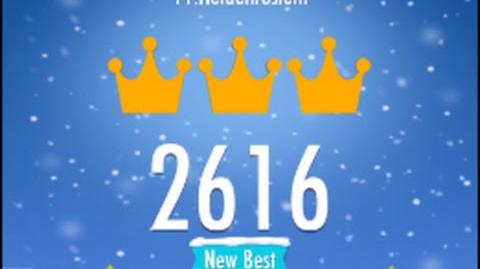