Hungarian Dance No. 5 is the 40th stage of Piano Tiles 2. It is unlocked when the player reaches Level 14. Because of the crazy speed and the double tiles in the last section of this stage, it is available for voting as the Hardest Song in Piano Tiles 2. It is also the first song in the game with 7.67 TPS, and it is the official fastest double-tiled song in the game before some of the updates. The current world record is 3702 by Robio Channel and the 2nd record is 3453 by Glory YT.

Hungarian Dance No. 5 is one of Brahms's set of 21 dances (Ungarische Tänze, WoO 1), of which their tunes are based on Hungarian melodies. They are some of Brahms's most popular works. He originally wrote them in piano in four hands, later transcribed the first 10 dances into solo piano, and three of them have orchestral arrangements made by him.

It is notable that most of them are not original compositions by Brahms himself. No. 5 is based on a composition by Béla Kéler, which Brahms mistakenly thought it was a traditional folk song. 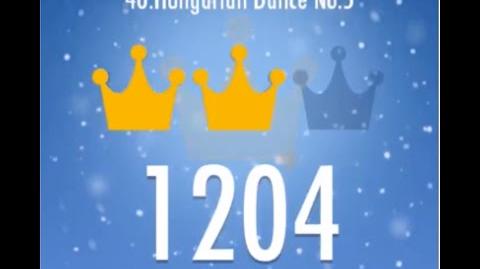 The major difference between the version in the game has the middle section doubles in speed, which is present in some versions, but not indicated in the original score. The stage includes only up until right before the F# Major section in the middle, where it jumps to Coda and end the piece. This is likely to shorten the length for a fast-paced stage.

The stage is notable for its extremely fast speed, as demonstrated directly in the beginning. Perhaps the most deceptive part of the stage, though, is the section immediately after two stars are earned, where the tempo doubles, and there are only single tiles and double tiles left. The tempo change can largely throw the players off track on the first few attempts, and even experienced players can have trouble to keep up consistently.

Be extremely careful when a stream of single tiles rushes into the player. This happens near the end of each section, and can only be conquered through practice. If the speed is too fast at the time being to play, it is recommended to skip this stage, and come back when the speed of at least 7.3 tiles per second can be comfortably played by the player.

The hardest part, of course, is what follows after two stars are collected. The music increases in speed, leaving almost no holding tiles left. On top of it, 3 rows of double tile pairs are present. While it is very difficult to consistently, it is slightly easier to simply observe the earliest row of double pairs of each set to determine where the rest of the double tiles' positions are. There are four occurrences of this pattern in total. Thank goodness that this section does not repeat unlike in the original version!

If you complete the

section, you'll complete the stage and get

. The stage will then restart, having you complete the stage again, which will run you into the insane double-tile part again, this time at about 9 TPS. If you somehow manage to complete it around 900 points, it'll once again repeat at 10 TPS. So far, great skill is needed to get

or above. The stage's speed at

(Full Completion 3 times) is possible even without revive, but it is extremely hard, the speed required is 12.07/s to complete 5 laps. Only slow device and bots can get
0 = (empty)
1 =

(Full Completion 3 times) or above, because the speed required is 13.07/s to get it, also filled with double and single tiles.