Sonata in D Major K311 is the 26th stage of Piano Tiles 2. It is unlocked when the player reaches Level 10.

Mozart wrote this sonata during his stay in Augsburg and Mannheim, between November and December in 1777. The sonata has three movements.

The key is D Major. Though, like in many sonatas featured in the game, only the exposition is included. There are two themes, the first in D Major and the second in A Major.

1st section: The opening is quite similar to many orchestral music, with chords in forte and a quieter phrase afterwards. After 195 points, the scale figures on the right hand are in sixteenth notes, which become single tiles in the game.

2nd section: During the "A" section of the second theme, be wary of the occasional turns, translated into 2-row double tiles, precisely occurring at 401 and 430 points. From 470 points onward, The "B" section consists of mostly sixteenth notes (single tiles), carried on to the next section. 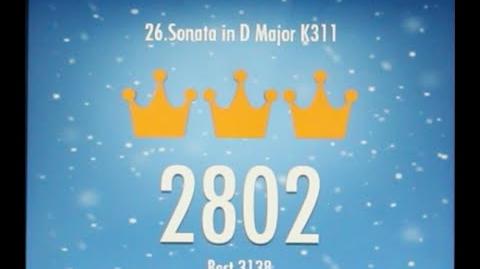